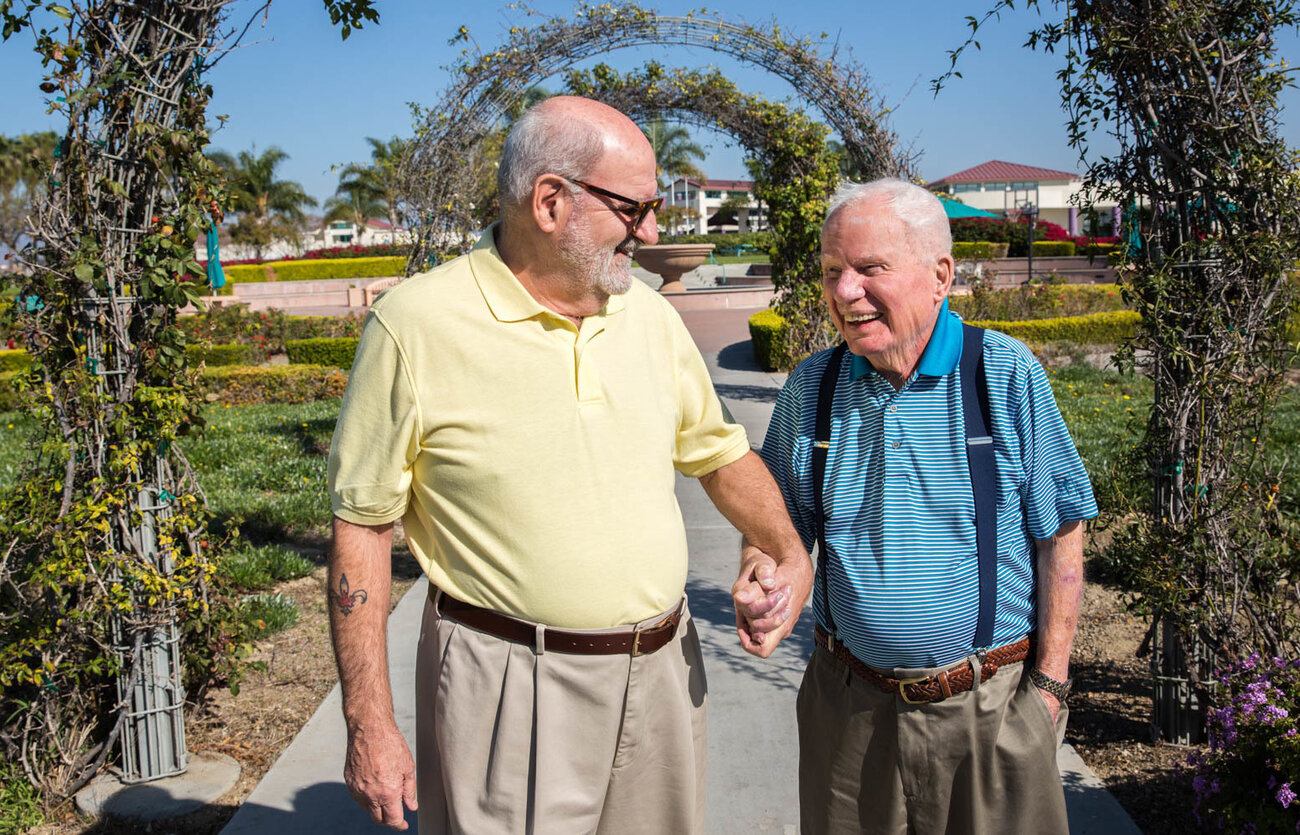 Jerry Nadeau, 72, (left) and his husband, John Banvard, 100, stand outside their home in Chula Vista, Calif.

“When we met, we were sort of in the closet, and I’d never had a real relationship. Now, we’ve been together almost 25 years,” Jerry tells John during a StoryCorps interview.

“What would it have been like if you didn’t meet me?” Jerry asks John.

“I would have continued being lonely,” John says. “I’d been absolutely lost.”

Both are veterans, having served in World War II (John) and Vietnam (Jerry), and when they moved into the veterans home together in Chula Vista, Calif., in 2010, Jerry says people there wondered what their relationship was.

“Well, when we got married, they knew what our relationship was,” Jerry says, laughing.

The couple married in 2013, and John says he was surprised by the warm reception they received. “I was expecting we’d be ridiculed, and there was very little of that,” he says.

“We’d gotten married at the veterans home, and we said, ‘If you came to see the bride, you’re out of luck.’ Do you remember that?” Jerry asks John.

“Yes, of course,” John says. The two indulge in the memory of a casual wedding — a frank display, if you will, of their unabashed love — featuring hot dogs as a main course, which, John says, “is hardly wedding food.”

Later, their achievement was affirmed by a simple introduction. “I was with you in the cafeteria, and somebody came up with their family, and they said, ‘This is Gerard Nadeau, and this is his husband, John,’ ” Jerry recounts. “I’d never heard that before.”

“I could say the same to you,” John replied. “I think we’re probably as happy together as any two people you’re likely to meet.”

StoryCorps is a national nonprofit that gives people the chance to interview friends and loved ones about their lives. These conversations are archived at the American Folklife Center at the Library of Congress, allowing participants to leave a legacy for future generations. Learn more, including how to interview someone in your life, at StoryCorps.org.