Left: A bartender at Hops & Barley brewpub draws a pint of beer in Berlin. Right: A portrait of Martin Luther. The protest that Luther launched 500 years ago revamped not only how Europe worshipped but also how it drank. He and his followers promoted hops in beer as an act of rebellion against the Catholic Church.

On this day 500 years ago, an obscure Saxon monk launched a protest movement against the Catholic Church that would transform Europe. Martin Luther’s Protestant Reformation changed not just the way Europeans lived, fought, worshipped, worked and created art but also how they ate and drank. For among the things it impacted was a drink beloved throughout the world and especially in Luther’s native Germany: beer.

The change in beer production was wrought by the pale green conical flower of a wildly prolific plant — hops.

Every hip craft brewery today peddling expensive hoppy beers owes a debt of gratitude to Luther and his followers for promoting the use of hops as an act of rebellion against the Catholic Church. But why did Protestants decide to embrace this pretty flower, and what did it have to do with religious rebellion?

In the 16th century, the Catholic Church had a stranglehold on beer production, since it held the monopoly on gruit — the mixture of herbs and botanicals (sweet gale, mug wort, yarrow, ground ivy, heather, rosemary, juniper berries, ginger, cinnamon) used to flavor and preserve beer. Hops, however, were not taxed. Considered undesirable weeds, they grew plentifully and vigorously — their invasive nature captured by their melodic Latin name, Humulus lupulus (which the music-loving Luther would have loved), which means “climbing wolf.”

“The church didn’t like hops,” says William Bostwick, the beer critic for The Wall Street Journal and author of The Brewer’s Tale: A History of the World According to Beer. “One reason was that the 12th century German mystic and abbess Hildegard had pronounced that hops were not very good for you, because they ‘make the soul of a man sad and weigh down his inner organs.’ So, if you were a Protestant brewer and wanted to thumb your nose at Catholicism, you used hops instead of herbs.”

Even before the Reformation, German princes had been moving toward hops — in 1516, for instance, a Bavarian law mandated that beer could be made only with hops, water and barley. But Luther’s revolt gave the weed a significant boost. The fact that hops were tax-free constituted only part of the draw. Hops had other qualities that appealed to the new movement; chiefly, their excellent preservative qualities. “All herbs and spices have preservative qualities, but with hops, beer could travel really well, so it became a unit of international trade that symbolized the growing business class, which was tangentially connected with the Protestant work ethic and capitalism,” says Bostwick.

Another virtue in hops’ favor was their sedative properties. The mystic Hildegard was right in saying hops weighed down one’s innards. “I sleep six or seven hours running, and afterwards two or three. I am sure it is owing to the beer,” wrote Luther to his wife, Katharina, from the town of Torgau, renowned for its beer. The soporific, mellowing effect of hops might seem like a drawback, but in fact it offered a welcome alternative to many of the spices and herbs used by the church that had hallucinogenic and aphrodisiacal properties. “Fueled by these potent concoctions, church ales could be as boisterous as the Germanic drinking bouts church elders once frowned on,” writes Bostwick. “And so, to distance themselves further from papal excesses, when Protestants drank beer they preferred it hopped.”

If the Catholic Church lost control over the printed word with the invention of the printing press — the technological weapon that ensured Luther’s success — it lost control over beer with the rise of hops. “The head went flat on monastic beer,” says Bostwick. “Did Protestantism explicitly promote hops? I don’t think so. But did it encourage the use of hops? I would say, yes, probably.” 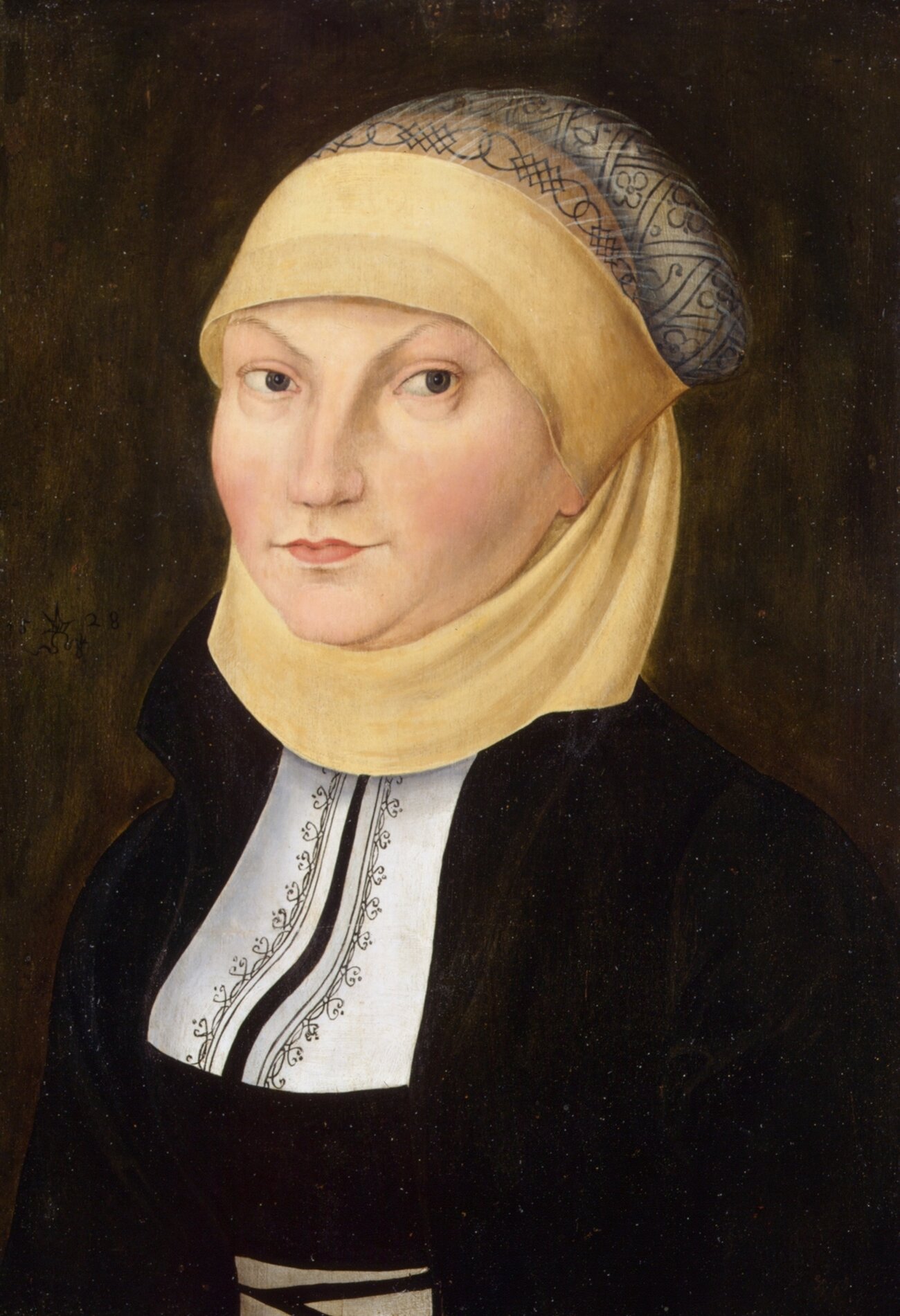 Luther’s wife, Katharina, was the brewer of the family.

Luther would have relished his role in promoting hops. If anyone loved and appreciated good beer, it was this stout, sensual and gregarious monk. His letters often mentioned beer, whether it was the delicious Torgau beer that he extolled as finer than wine or the “nasty” Dessau beer that made him long for Katharina’s homebrew. “I keep thinking what good wine and beer I have at home, as well as a beautiful wife,” he wrote. “You would do well to send me over my whole cellar of wine and a bottle of thy beer.” Days before he died, in February 1546, in one of his last letters to his wife, he praised Naumburg beer for its laxative properties. Luther suffered excruciating agonies from constipation, and it was therefore with immense satisfaction that he announced his “three bowel movements” that morning.

In an age where the water was unsafe, beer was drunk by everyone and was the nutritional and social fuel of Germany. “It was a really natural and very common part of every household pantry,” says Bostwick. “I compare it these days to a pot of coffee always simmering on your countertop. Back then it was a kettle of beer. Beer was brewed less for pure enjoyment than for medicinal reasons (it incorporated herbs and spices) and for pure sustenance. Beers then were richer and heartier than today. They were a source of calories for the lower classes who did not have access to rich foods.”

Not surprisingly, beer pops up at pivotal moments in Luther’s life. Most notably, after taking on the formidable might of the Catholic Church, an unruffled Luther famously declared that God and the Word did everything, “while I drank beer with my [friends] Philipp and Amsdorf.” Luther’s teachings were mocked as “sour beer,” and one of his critics disparaged him as a heretic from the filthy market town of Wittenberg, populated by “a barbarous people who make their living from breweries and saloons.” But as he gained fame and became a popular hero, a range of Lutheran merchandise was launched, including beer mugs featuring the pope as the Antichrist.

When the excommunicated Luther married the runaway nun Katharina von Bora, the town council gave the couple a barrel of excellent Einbeck beer. It was a fitting gift. Beer was soon to assume an even more central role in Luther’s life, thanks to his wife. The intelligent, talented and exceptionally competent Katharina not only bore six children and managed the Luthers’ large household with its endless stream of guests but also planted a vegetable garden and fruit trees, raised cows and pigs, had a fish pond, drove a wagon, and — to her husband’s undying delight — opened a brewery that produced thousands of pints of beer each year. Her initial shaky attempts produced a thin, weak brew, but she soon got the hang of it and learned exactly how much malt to add to suit her husband’s taste. Luther was ecstatic — Lord Katie, as he affectionately called her, had assured him a steady supply even when Wittenberg’s breweries ran dry.

Luther might blanch a bit as a good Protestant at being called a saint. … In the interests of Protestantism, I wouldn’t call him a saint, but he was certainly a beer enthusiast, and many a beer bar and brewery today has a picture of Martin Luther on their wall.

Luther’s favorite spot to hold forth on theology, philosophy and life in general was not the tavern but the table. The long refectory table in the cavernous Luther home seated up to 50 people. “This was Luther’s especial domain,” writes Andrew Pettegree in his elegant biography Brand Luther: How an Unheralded Monk Turned History. “The day’s labors past, he would sit with his friends and talk. Fueled by his wife’s excellent beer, conversation would become general, discursive, and sometimes unbuttoned.”

Unbuttoned is an understatement. Voluble, energetic and beery, Luther’s conversation zigged and zagged between the sublime and the scatological, to the amazement of his students, who hung on his every word. The church was called a brothel and the pope the Antichrist. Former popes “farted like the devil” and were sodomites and transvestites. His students collected these jewels into a book called Table Talk. When it was published, it went viral.

But though he clearly loved his tankard, there is no record of Luther being a lush. In fact, he could be quite a scold when it came to drunken behavior. He lamented the German addiction to beer, saying, “such an eternal thirst, I am afraid, will remain as Germany’s plague until the Last Day.” And he once declared, “I wish brewing had never been invented, for a great deal of grain is consumed to make it, and nothing good is brewed.”

This was no doubt a spot of grandstanding. For all his protestations, Luther’s beer stein was always full. He loved local beer, boasted of his wife’s brewing skills, and launched a movement that helped promote hops. Does that make him a patron saint of the craft brewery?

“Luther might blanch a bit as a good Protestant at being called a saint,” points out Bostwick, “and there’s already a brewery saint called St. Arnold, who saved his congregation from the plague by making them drink beer. In the interests of Protestantism, I wouldn’t call him a saint, but he was certainly a beer enthusiast, and many a beer bar and brewery today has a picture of Martin Luther on their wall. So let’s say that while we certainly don’t genuflect to him, he’s known and appreciated.”