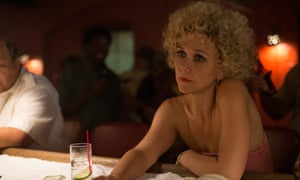 Set in the grimy, trash-strewn New York of 1971, The Deuce is named after a notoriously seedy stretch of West 42nd Street that was populated by pimps and prostitutes, and home to live peep shows and porn shops. Written by David Simon, who created The Wire, and his frequent collaborator George Pelecanos, the series charts the rise of the pornography industry in New York City. Simon has said that the show is about “the commodification of women” and from the female bar staff poured into skimpy leotards by James Franco’s bar manager, Vinnie, to the violent control the pimps exert over the prostitutes they run, every woman in the show, and her sexuality, is being packaged and profited from. Maggie Gyllenhaal plays Eileen “Candy” Merrell, a prostitute and single mother who rejects street-walking protocol and refuses to be controlled by a pimp, stating that “nobody makes money off my pussy but me”.

It is a typically nebulous answer from an actor, who, in spite of roles in mainstream films such as The Dark Knight and Nanny McPhee Returns, has spent much of her career in the independent film sector. She is famed for playing the kind of complex, unconventional women who are now increasingly emerging from the small screen; her most famous role to date, of course, was the troubled, submissive assistant to the masochistic James Spader in 2002’s Secretary. While initially wary of the extensive shooting schedules of most series, the enormous success of The Honourable Woman – the BBC miniseries that won her a Golden Globe for her role as Baroness Nessa Stein – opened up Gyllenhaal to television. With The Deuce – set to be one of HBO’s biggest shows of the year – how did she feel about the high levels of nudity the part required?

“You know, I spent no time moralising it. I am pretty comfortable with it,” Gyllenhaal says when we meet in a slick boutique hotel on the Brooklyn waterfront. “I have never been very shy about my body, and this is something I really believe in.” She lets out a small laugh. “This is so silly, but the only place I have felt shy is imagining those people who I see when I pick up my kids from school watching it. And I have to be honest and say that I don’t think I ate any bread at all while I was making this show. When you know you are going to have to wear very short shorts all summer long, you don’t.”

The show has already been commissioned for a second season, which will jump forward to the late 1970s; while a pending third season will take place in the mid-1980s, thus charting the effects of the boom in pornography on its players over a 15-year stretch. In order to explore the intricacies of such a shrouded, changing industry, Gyllenhaal was faced with a challenge. “There is so much about sex work that is in the dark, because it’s illegal, so how do you get that information in a reliable way?” she asks. 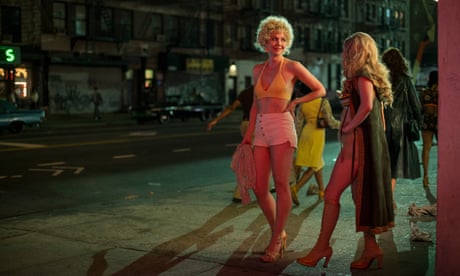 A similar shift took place with Gyllenhaal’s ambitions, too. “I wanted some kind of guarantee that I would be a part of the storytelling, part of considering what it is we want to be saying,” she says. Gyllenhaal asked for a production credit, but people around her said that given a show of this size and profile she shouldn’t expect to get one. “And I thought, ‘Well, I’m still going to ask for it.’” To her surprise her request was granted. When this happened she felt a “real shift in my sense of myself as a woman and an artist. Which was like a meta version of what the piece is about.”

So far, The Deuce has been widely applauded for its exploration of the female gaze, and Gyllenhaal claims that it is “absolutely, definitely a feminist project”. But therein also lies a challenge: how to make a show about the sex trade and pornography without it becoming pornographic itself. Gyllenhaal, however, believes that is part of the show’s power and what it has in common with The Handmaid’s Tale and The Girlfriend Experience.