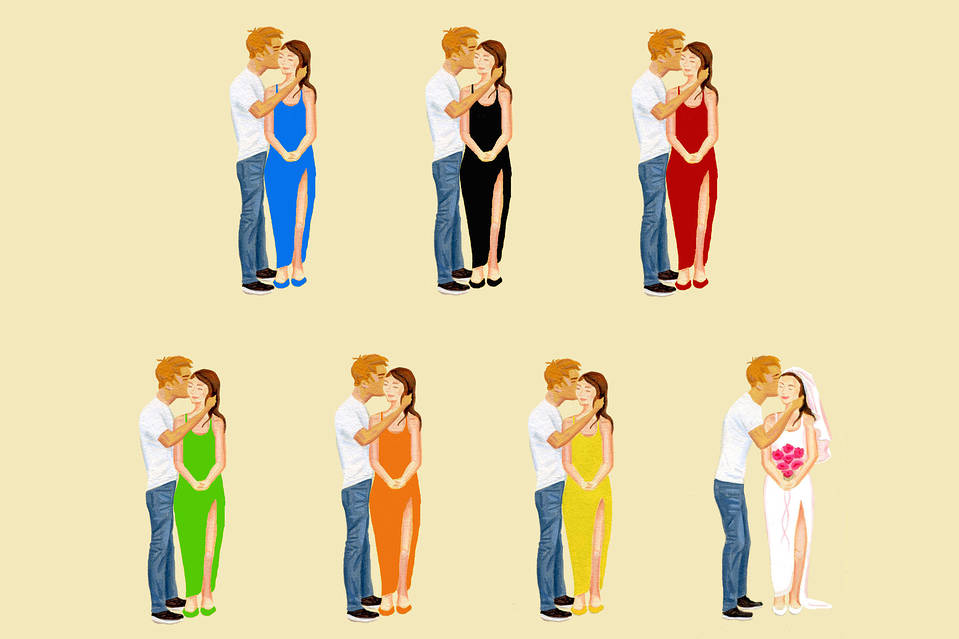 Kevin, a 24-year-old recent college graduate from Denver, wants to get married someday and is “almost 100% positive” that he will. But not soon, he says, “because I am not done being stupid yet. I still want to go out and have sex with a million girls.” He believes that he’s figured out how to do that:

“Girls are easier to mislead than guys just by lying or just not really caring. If you know what girls want, then you know you should not give that to them until the proper time. If you do that strategically, then you can really have anything you want…whether it’s a relationship, sex, or whatever. You have the control.”

Kevin (not his real name) was one of 100 men and women, from a cross-section of American communities, that my team and I interviewed five years ago as we sought to understand how adults in their 20s and early 30s think about their relationships. He sounds like a jerk. But it’s hard to convince him that his strategy won’t work—because it has, for him and countless other men.

Marriage in the U.S. is in open retreat. As recently as 2000, married 25- to 34-year-olds outnumbered their never-married peers by a margin of 55% to 34%, according to the U.S. Census Bureau. By 2015, the most recent year for which data are available, those estimates had almost reversed, with never-marrieds outnumbering marrieds by 53% to 40%. Young Americans have quickly become wary of marriage.

Many economists and sociologists argue that this flight from marriage is about men’s low wages. If they were higher, the argument goes, young men would have the confidence to marry. But recent research doesn’t support this view. A May 2017 study from the National Bureau of Economic Research, focusing on regions enriched by the fracking boom, found that increased wages in those places did nothing to boost marriage rates.

Another hypothesis blames the decline of marriage on men’s fear of commitment. Maybe they just perceive marriage as a bad deal. But most men, including cads such as Kevin, still expect to marry. They eventually want to fall in love and have children, when their independence becomes less valuable to them. They are waiting longer, however, which is why the median age at marriage for American men has risen steadily and is now approaching 30.

My own research points to a more straightforward and primal explanation for the slowed pace toward marriage: For American men, sex has become rather cheap. As compared to the past, many women today expect little in return for sex, in terms of time, attention, commitment or fidelity. Men, in turn, do not feel compelled to supply these goods as they once did. It is the new sexual norm for Americans, men and women alike, of every age.

This transformation was driven in part by birth control. Its widespread adoption by women in recent decades not only boosted their educational and economic fortunes but also reduced their dependence on men. As the risk of pregnancy radically declined, sex shed many of the social and personal costs that once encouraged women to wait.

These forces have been at work for more than a half-century, since the birth-control pill was invented in 1960, but it seems that our norms and narratives about sexual relationships have finally caught up with the technology. Data collected in 2014 for the “Relationships in America” project—a national survey of over 15,000 adults, ages 18 to 60, that I oversaw for the Austin Institute for the Study of Family and Culture—asked respondents when they first had sex in their current or most recent relationship. After six months of dating? After two? The most common experience—reported by 32% of men under 40—was having sex with their current partner before the relationship had begun. This is sooner than most women we interviewed would prefer.

Many young men and women still aspire to marriage as it has long been conventionally understood—faithful, enduring, focused on raising children. But they no longer seem to think that this aspiration requires their discernment, prudence or self-control.

When I asked Kristin, a 29-year-old from Austin, whether men should make sacrifices to get sex, she offered a confusing prescription: “Yes. Sometimes. Not always. I mean, I don’t think it should necessarily be given out by women, but I do think it’s OK if a woman does just give it out. Just not all the time.”

Kristin rightly wants the men whom she dates to treat her well and to respect her interests, but the choices that she and other women have made unwittingly teach the men in their lives that such behavior is noble and nice but not required in order to sleep with them. They are hoping to find good men without supporting the sexual norms that would actually make men better.

For many men, the transition away from a mercenary attitude toward relationships can be difficult. The psychologist and relationship specialist Scott Stanley of the University of Denver sees visible daily sacrifices, such as accepting inconveniences in order to see a woman, as the way that men typically show their developing commitment. It signals the expectation of a future together. Such small instances of self-sacrificing love may sound simple, but they are less likely to develop when past and present relationships are founded on the expectation of cheap sex.

Young people in the U.S. continue to marry, even if later in life, but the number of those who never marry is poised to increase. In a 2015 article in the journal Demography, Steven Ruggles of the University of Minnesota predicted that a third of Americans now in their 20s will never wed, well above the historical norm of just below 10%.

Most young Americans still seek the many personal and social benefits that come from marriage, even as the dynamics of today’s mating market conspire against them. It turns out that a world in which it is possible to satisfy our sexual desires much more immediately carries with it a number of unhappy and unintended consequences.

—Dr. Regnerus is associate professor of sociology at the University of Texas at Austin. This essay is adapted from his new book, “Cheap Sex: The Transformation of Men, Marriage and Monogamy” (Oxford University Press).